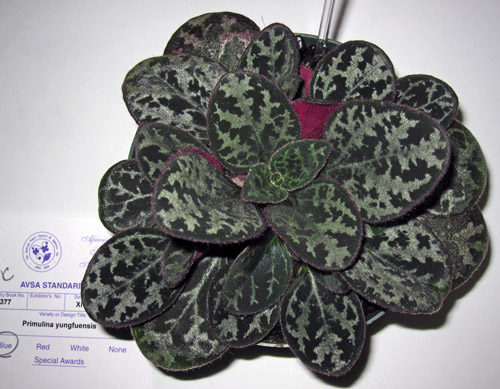 This species native of China has patterned foliage not seen before in Primulina.

Here’s to hoping that it will be distributed your way and that someone is working on the first hybrids from this very unusual and different plant.

Is this the Primulina clue that we have been looking for?

Is this the clue that we have been looking for?

From a post intercepted from Gesneriphiles by Jim Roberts:

I have not been able to flower this one after growing it for 4 years. I don't know if anyone else here has either. But I asked Avery Chen how he flowered his on Facebook. I suspected the plant might need a cool-down period. Here is his response:

"Hi Jim, I leave them outside with lowest winter temperature drops to around
4 degree these 2 years. They originate from GX with cold winter approaching freeze point. Frost could be expected. I think it might be an important triggering factor."

From my discussion of the flowering response for Primulina previously, I did not give any weight to a cold treatment.  Temperature manipulation is a known technique in other commercial crops like Cineraria and Regal Geraniums to induce flowering in the Spring.

If some species are proven to be temperature sensitive, that could revolutionize predictable flowering, depending on your point of view.  If Primulina wentsaii is crossed into the gene pool, there could be a line of hybrids that will predictively flower after a cold treatment allowing it to be a flowering commercial crop.  The cold treatment period saves money in production. 4 degrees C is about 40 degrees F.   The home owner may not be as happy if they can never get the hybrid to flower again until they learn of the cold trick.

The trade magazine Today’s Garden Center has a report by Steve Bailey, a retail financial advisor, for independent garden centers.  He is optimistic because sales are up.  He points out that the best categories from the best garden centers are Annuals, Shrubs, Perennials, Herbs and Veggies, Tropical plants.  Tropical plants are both indoor and outdoor and that demand for indoor houseplants has risen.  His conclusion is these traditional major categories are too important to not give them your full attention.

It’s unclear whether my ‘Mini’ plants for Miniature Gardens are included in the ‘Tropical Plants’ grouping or if they are considered one of those new angles to garden center products.  At least there was a comment from the 2015 State of the Industry survey:  “…Mini plants are still hot…”

My own survey from talking to vendors at Cultivate15 in Columbus, OH is that the trend is still up.  A new source in Florida is feeding the 2” foliage market and doubling sales each year.

The IGC East trade show starts Tuesday in Baltimore.  Interestingly, not one of the 4-5 exhibitors from 2014 in the Mini plant category is returning this year.  What to make of that??

Also from Ohio, I met a foliage distributor in the mid-west who thinks that Florida foliage growers are coming on-line with new volumes that will drive down prices of the 2” plants.

My reaction to that is that many of the plants that I’ve selected cannot be sold for less because the input costs are too high.  The plant does matter and unique plants seek their own level.

These are just impressions.  No one can predict what is going to happen.

All I know for sure is that every customer of mine, who displays ‘Mini’ plants, sells some every week of the year!

Posted by Gary's Specialty Plants at 11:01 AM No comments: