It's better this time around


It’s better this time around.


I was happy to get to see it by paying a lot of money in the Gesneriad auction last year.  It did not perform well in the first flowering after surviving a shaky start.


This second flowering is stronger with several buds showing.  The flowers are nice ---- Yellow is always a good color to have.


It will not be a commercial plant but every Sinningia lover will want to have one. 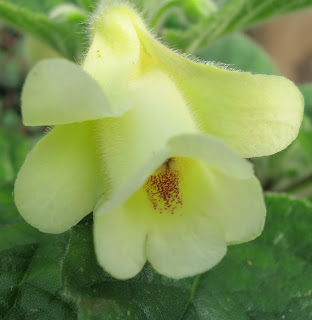 ﻿
Posted by Gary's Specialty Plants at 6:03 PM No comments:


“The economy always creates bad jobs, but in a strong labor market, workers don’t take them.”

I could not pass up this quote by an economist that best describes the United States employment outlook.


There are unemployed, underemployed and people who hate their jobs.


There has never been a better time to create something on your own.  Seth Godin has been preaching this continuously to get you to do your ‘Art’ and be happy.


But to create your own work or change jobs in uncertain times will be seen as foolhardy or reckless and require tremendous courage.


Also, but --- it is foolish to spend a lifetime whining about your job and the lack of opportunity.  If you are willing to move, there is a job for everyone who wants one.


Is this a great country or what?

Posted by Gary's Specialty Plants at 11:09 PM No comments:

A talented man has died.

﻿A talented man has died.

Can you have a friend that you have never met?

Dr Jon T. Lindstrom, Associate Professor of Horticulture, University of Arkansas, has died from the deadly cancer, melanoma.   He was in the prime of his life and this is very sad news.

I had a professional relationship with Jon.  We conducted business by e-mail and never had the chance to meet in person.

It started when I became aware of the new Sinningia hybrids that Jon was releasing from his Sinningia breeding program at the University of Arkansas.  Mary Schaeffer and I were trying to collect new Gesneriads for the sales room at the 2011 national convention of the Gesneriad Society in Philadelphia.

Through that exchange I learned that he had a tissue culture lab that he was using to propagate some of his Sinningias.  Jon agreed to propagate several Sinningias selected by me for possible commercial sales.

Jon was very accommodating and through trial and error we produced thousands of plants that were previously not available in commercial numbers.  The biggest successes were S. ‘Prudence Risley’ and S. ‘Li’l Georgie’.

I constantly studied his Sinningia work through his pictures on Flickr and looked for potential commercial plants.  Jon was systematically crossing Sinningia species and selecting what interested him.  Occasionally, I thought that I would call him, but then decide that it might break the spell of the perfect arrangement.

When he told me that he was sick --- our last e-mails, it was the end of our great business friendship.  He was incapacitated by his treatment and could not continue his work.

In the Gesneriad hobby world, his legacy will be the several Sinningia hybrids that were released through the University of Arkansas.

Business-wise, we proved that S. ‘Li’l Georgie’ can be produced by tissue culture and will become a commercial plant for Miniature Gardens.

It is very sad that he is gone.

Eighth in a series,

Why would you want it?


It is very classy.  Nematanthus ‘Dibley’s Gold’ is a mutation from the plain green species, gregarius.  Seldom seen in commercial horticultural because of its long production time.


What is its best feature?


How would you grow it?


It can be grown in very bright light as a hanging basket but could maintain itself in lower light as a houseplant.


What would you do with it in a Miniature Garden?
Category:  Shrub/bush


‘Dibley’s Gold’ could represent a decorative shrub when grown as multiple tip cuttings.  An older plant with more length would be arching.  Because it is slow growing, it will hold its place for a long time. 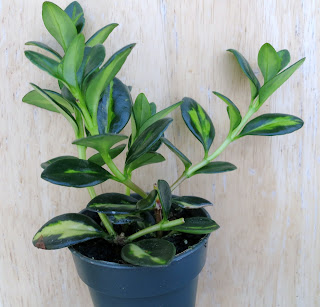 Posted by Gary's Specialty Plants at 4:00 AM No comments:


Ninth in a series,

Why would you want it?


Peperomia prostrate has interesting markings on fleshy green leaves.  It is rare but a durable plant.


What is its best feature?


It is very slow growing so will not over take any nearby plants.


How would you grow it?


As a houseplant, Peperomia prostrata can grow in very high light down to shade.  It can survive being dry without harm.


What would you do with it in a Miniature Garden?


Could be an interesting ground cover used near the edge of your container so it will trail out over the sides. 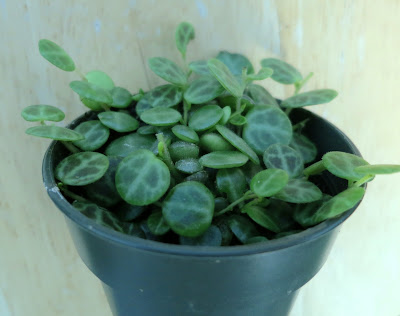 
Nematanthus ‘Dibley’s Gold’ is a very attractive foliage plant.  Having naturally shiny leaves and yellow variegation on dark green, it stands out among other more subtle greens.


I can’t find the history so I will just give credit to Dibley’s Greenhouse in North Wales, U.K., for discovering a mutation of Nematanthus gregarius and propagating it for distribution.


All of my stock plants came from a rooted cutting by Quentin Schlieder, on the sales table of our Delaware African Violet and Gesneriad Society meeting.


That original plant has had many trimmings for tip cuttings over the last several years and has been my reliable specimen plant to enter in shows.  It always looks good.  267 pots have been sold.  Why such a low number?  That’s all that I could ever produce.


After the third year, I got a few orange candy corn flowers but you don’t really need them.


I don’t see it in commercial production, probably because of its slow growth.


But ‘Dibley’s Gold’ is worth having ---- a very easy houseplant.

Posted by Gary's Specialty Plants at 2:31 PM No comments: